LOUIS ARAGON: A TRANSLATION OF 'THE RED POSTER'

Today I have decided to translate a poem by the French poet Louis Aragon. In fact although a lot of his verses are available in French, I really struggled to find English translations of the poems online as only a few are available. The only version I found was the one from Wikipedia so I thought it would be a good idea to try to make another translation available in English. Moreover it will give me the opportunity to talk about the poet himself and his political commitment since he was a major figure of the French political and literary history.

Louis Aragon was born in the fashionable area of 'Neuilly-sur-Seine' in and died in 1982. Poet, novelist, journalist and essayist, his poems and prose writings often deal with his experience of the Second World War and celebrate communist heroism and patriotism, while throwing light on the importance of memory and commemoration. started his literary career with his group of Surrealist and Dadaist friends but eventually left them to entirely devote himself to communism until the end of his life. His ideological convictions are often reflected in his literary works.

The poem I am dealing with today is called ‘L’affiche rouge’ (literally ‘The Red Poster’) and is taken from ’s autobiographical novel ‘Le Roman Inachevé’ (literally ‘The unfinished novel’) which is written in verses. Louis Aragon wrote it in remembrance of the ‘Manouchian group’, a group of foreigners who fought for the French Resistance and were arrested and shot by the Gestapo in February 1944. The one-day trial of these Resistance fighters, known as the ‘Manouchian group’ (after the leader of the Parisian section of the organization, the Armenian poet and activist Missak Manouchian), gave the collaborationist press the opportunity to create a large publicity campaign. The reason behind it was rather simple: in the ‘Manouchian group’, 20 were foreigners and 11 were Jews. The aim of this huge campaign was to use the group in order to draw a picture of the Resistance as something communist, foreign and above all Jewish. Quite significantly the daily France-Soir headlined its coverage of the trial with: “The trial of the 24 Judeo-Communist terrorists/The Jew Rayman and Alfonso, accomplices of Missak Manouchian, tell judges the story of the murder of Dr. Ritter.”But why is the poem called ‘The Red Poster’?

During the few days before the Manouchian group’s execution, the collaborators campaign reached its height through the publication and posting, throughout , of ‘L’Affiche Rouge’, namely ‘The Red Poster’. The headline of the poster asked ‘Liberators?’ and at its bottom end one could read: ‘Liberation! By the army of crime.’ Then 10 photos showing members of the group were placed in the middle of the poster, along with a summary of their ‘crimes’: “Alfonso — Spanish Red — 7 attacks” “Grzywacz — Polish Jew — 2 Attacks,” “Rayman — Polish Jew — 13 Attacks.” At the apex of the inverted triangle of photos, pointed to by an arrow, were the words: “Manouchian — Armenian — Chief of the Group — 56 Attacks 150 dead 800 Wounded.”

(see the poster below) 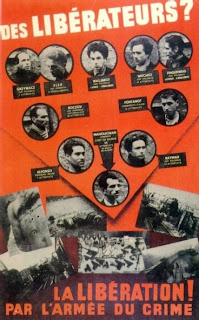 ’s poem had a very specific aim: it was written in remembrance of these Resistance fighters and aimed at preventing their story from being forgotten. The poem is specifically dedicated to all the foreigners who fought for during the Occupation of the country. All through his poem insists on the simplicity of the Resistance fighters: he suggests that they were not looking for glory and that they died soberly.

Below is the original poem in French: (Taken from an excellent website dedicated to Aragon, ‘Louis Aragon Online’, created by Dr. Wolfgang Babilas, professor at the ‘Romanisches Seminar der Westfälischen Wilhelms-Universität’ in Munich. Available at: http://www.uni-muenster.de/LouisAragon/welcome.html) 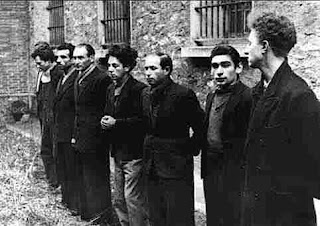 Now here is my version of the poem in English with some annotations when I was not sure about the translation:

1 You demanded neither glory nor tears

2 Nor organ nor last rites

4 You made use simply of your weapons

5 Death does not dazzle the eyes of Partisans

6 You had your pictures on the walls of our cities

9 Because your names are hard to pronounce

10 Was meant to create fear among the passers-by

(In line 9 I did not follow ’s syntax: in the original, it literally says ‘Because to pronounce your names are difficult’, but I thought it sounded a bit odd in English. However I am not sure about my decision since ’s syntactic choice in the original poem would also sound odd in spoken French but is not really shocking since it is poetic language… Should I have kept the same syntax to respect ’s poetic choice or was it a good thing to adapt it for the English translation?)

(Line 10 was difficult to translate because what Aragon is saying is that the poster was meant to have an effect of fear on the passers-by, but talking about an ‘effect of fear’ sounded a bit bizarre. So I chose to skip the word ‘effect’ and to talk about the creation of ‘fear’. I also hesitated to write ‘Was meant to frighten the passers-by’ but this is not exactly what writes, otherwise he would have said ‘cherchait à effrayer les passants’ and it would have simplified the original verse.)

11 No one seemed to see you French by choice

12 People went by all day without seeing you

13 But at curfew wandering fingers

14 Had written under your photos FALLEN FOR FRANCE

15 And it made the dismal mornings different

(Line 12 literally says that people were passing by all day with ‘no eyes for you’; yet I decided to use the verb ‘to see’ to translate this idea since I did not think a literal translation would have suited.)

16 Everything had the uniform colour of frost

late February for your last moments

18 And that is when one of you said calmly

23 Get married be happy and think of me often

24 You who will remain in the beauty of things

25 When everything will be over later in (a)

(Line the original literally writes ‘when everything will be finished’. I decided to replace the word ‘finished’ by the preposition ‘over’ because I think it is shorter and keeps a better rhythm within the verse.)

27 How beautiful is nature and how broken is my heart

28 Justice will come on our triumphant footsteps

31 There were twenty-three of them when the guns flowered

32 Twenty-three who were giving the heart before the time

33 Twenty-three foreigners and yet our brothers

35 Twenty-three who were shouting as they fell.

NOTES ON THE POEM :

Drake, David, French Intellectuals and Politics from the Dreyfus Affair to the Occupation (Palgrave Macmillan: 2005)

An excellent website on ’s life and art: http://www.uni-muenster.de/LouisAragon/ (Although it is mostly in French and German)