BAUDELAIRE AND HIS ‘FLEURS’ 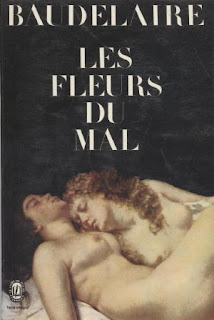 Today I will look at a poem by Charles Baudelaire and two of its English translations. The title of the poem is ‘A une passante’ and I chose to only look at two English versions so as to keep my post rather short and pleasant to read.

‘A une passante’ (literally ‘To a Passer-by’) is a poem from Baudelaire’s poems collection ‘Les Fleurs du Mal’ ('Flowers of Evil') and is from the part called ‘Tableaux Parisiens’ (Parisian Scenes) in the collection which mostly deals with the life of the city. The specific poem I am dealing with is from the 1861 edition, the last version reviewed by the poet himself before he died.

Throughout ‘Les Fleurs Du Mal’ Baudelaire talks about human destiny and his poems, sometimes idealistic, sometimes realistic, mainly deal with the conflict between good and evil. Challenging traditional dualities, he finds beauty in incongruous things and good in perverted ones. In the ‘Tableaux parisiens’ section the poet describes scenes from everyday life, grasping a present often perceived as transient and furtive. In ‘A une passante’ he evokes an unexpected and almost violent encounter with a woman he has furtively seen. Both beautiful and mysterious the woman does not seem to have noticed him. In deep mourning she appears like a flash of lightning in the night and eventually vanishes, leaving him to meditate on the love that could have been.

I will look at the two English versions of the poem given below and comment on the translated verses which struck me the most. The aim is not to judge Roy Campbell’s and Geoffrey Wagner’s translations but to comment on their choices when translating the poem and to point out their two different ways of interpreting the verses. I will put my comments in brackets for a better readability. I also added numbers at the beginning of each line so I can refer to them more easily.

The original version of the poem along with the two English translations were taken from http://fleursdumal.org, a very rich website where all the poems from ‘Les Fleurs du Mal’ are available to read online. 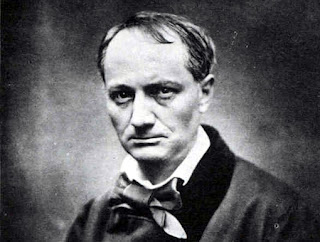 Here is the original poem by Baudelaire : 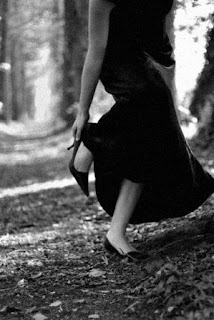 (In the title decides not to take gender issues into account and does not specify that Baudelaire's passer-by is a woman. In French both the article and the noun differ depending on what gender they refer to so the distinction is easily made between a man passer-by, ‘un passant’, and a woman passer-by, ‘une passante’. Moreover while Baudelaire addresses his passer-by in the title with the preposition ‘A’ (‘to’ in English), chooses not to keep it. He may have wanted to focus on what the poem is about rather than on the fact that it is dedicated to the passer-by.)

1 The deafening street roared on. Full, slim, and grand
2 In mourning and majestic grief, passed down
3 A woman, lifting with a stately hand
4 And swaying the black borders of her gown;

(Still in verse 4, Baudelaire does not specify the colour of the woman’s gown. However chooses to talk about the ‘black’ borders of her gown. He might have assumed that, since the woman is in mourning, she must have been wearing black clothes, something which would be quite coherent although Baudelaire does not write it. This raises an interesting point I think: should a translator interpret what the poem says and therefore add some details he considers useful for the understanding of the verses, or should he be more accurate and only keep the details the poet himself decided to give? To me, although translators can try to interpret the poem to produce their translation, adding further details, in that case an adjective, kind of betrays the original intentions of the poet. This is, however, debatable.)

5 Noble and swift, her leg with statues matching;
6 I drank, convulsed, out of her pensive eye,
7 A livid sky where hurricanes were hatching,
8 Sweetness that charms, and joy that makes one die.

(In verse 6 simplifies Baudelaire’s comparison that says ‘crispé comme un extravagant’, which literally means ‘contorted like an extravagant person’ and summarizes it with one adjective ‘convulsed’. Then, like he did in the first stanza, he adds the adjective ‘pensive’ to describe the woman’s eye, while Baudelaire only talks about her eye. may have thought that she looked pensive since she is compared to a statue but this remains his personal interpretation)

lighting-flash — then darkness! Fleeting chance
10 Whose look was my rebirth — a single glance!
11 Through endless time shall I not meet with you?

(This stanza is interesting because makes some noticeable changes. First he modifies the punctuation and therefore the rhythm. He chooses to put the dash, originally appearing after the word ‘darkness’, between ‘lighting-flash’ and ‘darkness’. Thus there is no separation between Baudelaire’s description of light and the rest of the stanza anymore. In ’s version the ‘lighting-flash’ stands on its own while ‘darkness’ now seems to be part of the atmosphere created in the rest of the verses.)

(At the end of line 9, while Baudelaire talks about ‘beauté’ (‘beauty’), replaces this word with the term ‘chance’. The translator may have wanted to stress the fact that this encounter is made perchance but therefore does not specify that it is the beauty which is ‘fleeting’ in Baudelaire’s words. He further insists on the fact that the encounter was very brief and chooses to add three new words to the poem: ‘a single glance!’.) 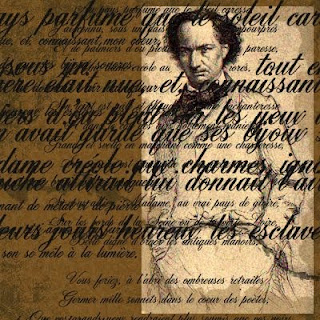 To a Woman Passing By

(As suggested by the title in which Wagner specifies that Baudelaire’s passer-by is a woman, the following translation seems very similar to the original poem written by Baudelaire. The impression is indeed given that he recreates the original with a maximum of fidelity in rhythm, syntax and punctuation.)

1 The deafening road around me roared.
2 Tall, slim, in deep mourning, making majestic grief,
3 A woman passed, lifting and swinging
4 With a pompous gesture the ornamental hem of her garment,

5 Swift and noble, with statuesque limb.
6 As for me, I drank, twitching like an old roué,
7 From her eye, livid sky where the hurricane is born,
8 The softness that fascinates and the pleasure that kills,

(In verse 5 Wagner also replaces the word ‘leg’ with the term ‘limb’, which to me seems less specific and leaves a space for readers interpretation. Otherwise this stanza is nearly a word-by-word translation.)

gleam... then night! O fleeting beauty,
10 Your glance has given me sudden rebirth,
11 Shall I see you again only in eternity?

(In verse 9 Wagner removes Baudelaire’s dash between ‘night’ and ‘fleeting beauty’ and thus modifies the poem’s rhythm. Contrary to the original there is no silence between the description of light and the rest of the stanza. The transition between the flash of lightning and the sudden darkness is not separated from the rest anymore and is therefore less striking than in the original to me.)

12 Somewhere else, very far from here! Too late! Perhaps never!
13 For I do not know where you flee, nor you where I am going,
14 O you whom I would have loved, O you who knew it!

(Wagner's last stanza is very similar to the original, though Baudelaire lays stress on the word ‘jamais’ (‘never’) and puts it in italic while Wagner does not choose to place emphasis on it.) 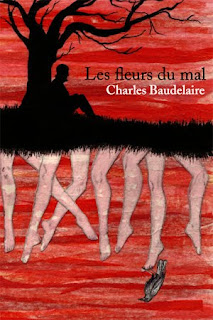 After having reviewed these two versions of Baudelaire’s ‘A une passante’, I will now attempt to make my own translation of the poem. As seen above translators can sometimes choose to recreate the original with a maximum of fidelity but they can also impart their own interpretation of the poem through their translation by modifying syntax, punctuation, or rhythm. For my translation I chose to keep the poem’s original syntax, punctuation, and vocabulary, trying to recreate in English the specific rhythm and atmosphere I felt in the original, that is the one of an unexpected, fleeting and painful encounter. However, since I’m French and therefore not a native English speaker, I understand that I might not always choose the right words and something that sounds good to me in French might not have the same impact in English; this may well be my biggest challenge. But since this is not meant for official publishing, I think it is worth trying! Comments, suggestions, critics or questions are all welcomed.

To a Woman Passing By

1 The deafening street around me roared.

woman passed, with a sumptuous hand

4 Lifting, swaying the festoon and the hem;

5 Nimble and noble, with her statuesque hand.
6 I was drinking, tense as an extravagant,
7 From her eye, livid sky where the hurricane germinates,
8 The softness that fascinates and the pleasure that kills.

lightning flash… then night ! — Fleeting beauty
10 By whose glance I was suddenly reborn,
11 Will I see you again only in eternity?

To conclude this post I would like to remark that translation is a very frustrating process since you can never fully capture all the specificities and the qualities of the original. Before translating this poem I was tempted to think that recreating the original with a maximum of fidelity was the best way to do justice to Baudelaire’s verses. However, after having read several versions and after having made my own, I now think that the point is not to find the perfect translation. What is interesting is to read various versions of the original so as to consider different ways of recreating a poem in another language and to compare different visions and interpretations of the verses. For that reason I think translation is not only about technique, skill or research, it is also an analytic and creative process.

http://fleursdumal.org/ (an impressive website were all the poems from ‘Les Fleurs du Mal’ are available to read online with their various English translations, along with useful information on the different editions.)

http://baudelaire.litteratura.com/ (A very rich website about Baudelaire and his art, although it is in French)